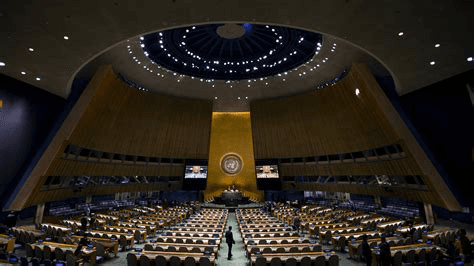 Good morning. I’m going to continue on with a sermon topic that I touched upon last week, and then I’m going to, in the upcoming weeks, eventually get back to the sermon series, Do You Believe in Jesus Christ? So for this week, I’m going to talk about a book of peace that is being planned by the United Nations with input from the Vatican. I have covered this topic on my channel called The Lamp in the Dark with Reginald Block. But I think it would help if there was some type of visual representation to go along with the commentary. So why don’t we turn in our Bibles or look at the screen? And let’s go to Revelation, chapter eight, verse ten.

And the third Angel sounded, and there fell a great starre from heauen, burning as it were a lampe, and it fell vpon the third part of the riuers, and vpon the fountaines of waters:

I quoted this last week, but I want to recap a couple of things. In the word of God, this wormwood burns, as it were, a lamp. The word lamp is critical because it tells us what is happening. What is happening here is the Antichrist has burning lamps coming out of his mouth. His job is to cause confusion in the world of Christianity, and for that matter, the entire world is deceived. And so he’s got a flood of testimonies coming out of his mouth because he gets his wisdom from Lucifer according to the word of God. God has one testimony. It says in Psalm 119,

Thy word is a lampe vnto my feete: and a light vnto my path.

God’s word tells us what is going on in this dark world. I covered the subject matter of Behemoth and Leviathan last week. To a small extent, I believe, and I showed you how God is talking about Lucifer and the Antichrist. Whereas most scribes, scholars, pastors and merchants are hearing the voice of Hippopotamuses, crocodiles and dinosaurs, they don’t understand spiritual things because they have spiritual problems. That’s part of the strategy of deceiving the whole world. People look to their religious leaders for guidance, but the religious leaders are ones that are often under the most attack out of anybody. And of course, in Isaiah, chapter 14, we know that Lucifer wants to be like the Most High. So he wants to emulate everything that the Most High does. In John chapter 14, Jesus

Peace I leaue with you, my peace I giue vnto you, not as the world giueth, giue I vnto you: let not your heart bee troubled, neither let it bee afraid.

If you trust Jesus Christ, you don’t have anybody to fear except for Him. And you just need to trust Him. And he gives peace to people that have been born again. But it’s a different type of peace. It’s not an ecumenical piece. It’s the peace of being sealed by the Holy Spirit, because you’re not going to get cast into the lake of Fire because you’ve been sealed by the Holy Spirit onto the day of Redemption. But without that ceiling, you are under the power of Satan, and you’re going to have strife, discord, and many things in your life that you will ultimately live to regret. It says in Daniel, chapter eight, regarding antichrist by peace shall destroy many. Lucifer has a perverted piece, a piece of ecumenism, a piece that tells people what they want to hear. What do people want to hear? They want their ears tickled.

Now, the United Nations, the Secretary General recently talked to politicians, rebuking them about using religion to divide communities that often worship the same God, albeit with a different name. So the United Nations Secretary General is echoing what the Vatican teaches is that God can manifest Himself to different peoples, different cultures, under different names. And of course, we know that there is no other name under Heaven whereby anyone can be saved but the Lord Jesus Christ. There is only one God, and he is not confused as to what his identity is. It goes on to say he urged religious leaders to live up to their responsibilities, saying religious leaders need to be apostles for peace. Which sounds good, but what type of peace is this? Is this an ecumenical piece like the world? Or is this the piece of being sealed by the Holy Spirit, which is reserved for few? I think we all know the answer to that question.

The Secretary General met with local authorities and civil society leaders, encouraging them as well with the message of reconciliation. I give my source there. And of course, Jesus Christ in Luke, chapter twelve, says, suppose you that I am come to give peace on earth. I tell you nay, but rather the division. Rather the division. Jesus divides because he’s the rock of offense. He causes division over His Word. He wants you to diligently seek Him out. And salvation is for few. So has the assembly of nations. Have they benefited from the concealment of wormwood by the Vatican changing Scripture? Do many modern Bibles follow this pattern? If so, why? Take a look at any Bible. Talk to your friends. I invite everybody. Have you ever used a Bible that said torch instead of lamp in the Book of Revelation, chapter eight, verse ten? For that matter, torch instead of lamp in the Book of Job, chapter 19. Or give the ultimate test here.

Go to the Song of Solomon, chapter two, verse seven. Does it say she please or does it say something else like he please or It please? The Vatican is relentless. They will never cease to corrupt the word of God and to take away prophecy, one of the easiest prophecies to discern from my standpoint, having been a believer in the 1611 Bible and all the Reformation Bibles, is that Solomon is holding a drunk woman in his arms. That’s why it says she please, doesn’t say anything else, but she please. And it has never said anything but she please and all the Reformation Bibles. So make sure you put your Bibles to the test. In the United Nations, back in May of 2007, I documented a comment made by June Margolis.

Therefore, as a last sort of concrete idea, I would like to propose that we work to establish a new liturgy, a new prayer book that all people can use, regardless of their religion. So this is the same ecumenical theme that the world keeps bringing up, is that we need peace. And the way to get peace is tell everybody what they want to hear, that God loves them, which God does love the world, but he loves those that put their trust in Jesus Christ alone, that don’t worship any other gods. And the world offers peace through ecumenism, through uniting all religions under one God, which is not Christianity. I show a screenshot here of a video that still can be accessed, although I think maybe this one got taken down. But you can still find the content on YouTube. It’s official. Pope Francis Reveals Plans for One World Religion 2016. It had a lot of views. And Pope Francis comments that we are all children of God. Well, that would be nice.

That’s a happy thought, but that’s not what God says. God says we’re all children of the God of this earth, the Devil, until the few of us get born again of the Spirit, and then we become children of the most high God, the Lord Jesus Christ. So you can’t just tell everybody that they are a child of God if you don’t know that they’re born again of the Spirit. And it says in two Corinthians, chapter four, in whom the God of this world had blinded the minds of them which believed not, lest the light of the glorious Gospel of Christ, who is the image of God, should shine unto them. You need to have knowledge of the scriptures. You need to be born again of the Spirit. You need to put your complete trust in Jesus Christ. He will teach you the realities of this world so that you don’t fall victim to the flattering lips of the Babylonian religious leader called Leviathan, known by the unsaved world as a crocodile or a dinosaur. I’m going to stop at this point and continue this lesson next week and go deeper into the United Nations are working on a world prayer book. They keep announcing it. It doesn’t necessarily make the front pages of the papers, but we have years to hear what the Spirit is saying to the churches, and we are not ignorant of Satan and his devices. Until next week, God bless everyone. And I will talk with you then. Bye.