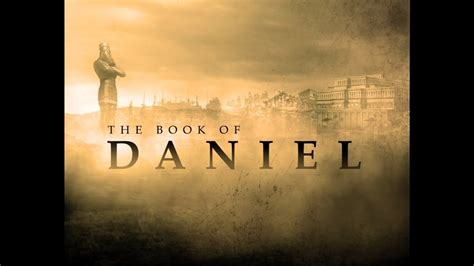 Transcript of the below video: Greetings fellow students of prophecy, we’re going to look at Daniel chapter nine. (opens text and original scanned image of the actual 1611 bible)
This is one of the most controversial chapters in the book of Daniel. For example, in verse 26, what are the three score and two weeks during which Messiah is cut off? And who are the people of the Prince that shall come, that destroy the city and the sanctuary? Notice it is the people who destroy the city and sanctuary, not the Prince. Many say this is something of the distant future. However, the historic Church interpreted this in light of history.

What events in history can be correlated with this verse? In my book titled Daniel Prophecy Unsealed, I answer this question and verse 27, what is the Covenant that is confirmed for one week? This must be interpreted in context. The first 20 chapters deal with the Covenant God made with Israel and Daniel repents of he and the people transgressing it. They broke the Covenant, but the angel tells Daniel that it will be once again confirmed. Or is this, as popular Futurist interpreters say, has something to do with Antichrist contextually? Is there any basis in chapter nine to support such a claim? These are some of the issues I explore in my book and who causes the sacrifices to cease? And in verse 27, who is he? The one who confirms the Covenant?

What or who is the antecedent to this pronoun? The answer is in verse 26. This is something I discuss in my book Prophecy Unsealed. There are many speculations about the identity of the people of the Prince that shall come. Many interpretations focus their attention on the Prince. However, the actual subject of the phrase is the people who come and these people are under a Prince. Who are these people and who is the Prince and who causes the sacrifice to cease? And who makes Jerusalem and the temple desolate? Surely the sacrificial system was brought to an end by Christ’s sacrifice. And what of the judgment of Jerusalem? When was it made? Desolate?

History records these events. We can only truly understand prophecy by its fulfillment. History confirms prophecy. These are just some of the many questions I answer in my book Prophecy Unsealed.
You can get the book at the bookpatch.com. I’ll leave the link at the end of the video and below. Thank you for listening. May God go with you.