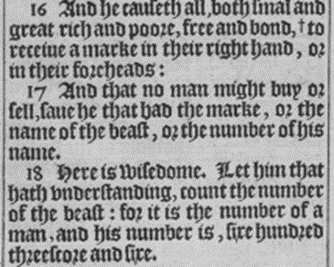 The question we have to ask ourselves is simple. Why do some modern bibles say the mark of the beast will be forced and it will be on the forehead and hand? One of the most popular bibles in the world is the NIV. This bible makes it clear that the mark (whatever it is) will be forced (so you have no choice). If we look at the Authorised Version of 1611 and all reformation bibles they will say two key words. Causeth and IN. They are completely in opposition to the NIV and incidentally the NAB. (Roman Catholic Bible)

Revelation 13:16 was not changed until the middle of the 18th Century and become official at the time of Westcott and Hort in the late 19th century. In addition the word he was changed to it.

It no longer a person but a thing and IT will force all to take the mark on their forehead or right hand. This therefore causes all kinds of speculation as to what this mark is. So why the change and who is making it? (Please listen to the presentation)

People will be beguiled to swearing an oath that Lucifers bible is the word of God. In Mathew 5 Jesus warns us not to swear an oath. According to the presenter the mark will be an oath not a physical mark. (See Zechariah 5) Only the 1611 bible will show this accurately which is why it has been so vehemently opposed and a counterfeit KJV was created to water it down – to dilute the Word and deceive people in to thinking it is the 1611.

Study notes from John the presenter.

Your thoughts (head) are demonstrated by your works (hand). James tells us as much.