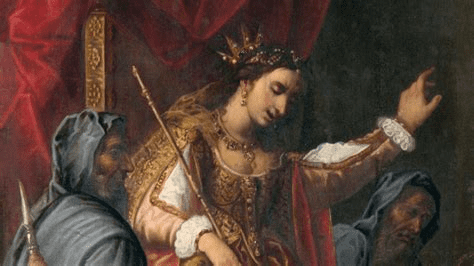 Transcript: Greetings, everyone. I’m going to tackle a very sensitive subject here today, the subject of women teachers. What does the Bible say about it? I acknowledge that this can be a very sensitive subject, especially in the light of postmodern women’s liberation values that have tainted many people. But first I’ll read what Paul wrote to Timothy on behalf of the churches. Then I’ll read what the angel of God said to John regarding the subject of women teachers. And after that I’ll comment. Now I need some glasses. Let’s see.

But I suffer not a woman to teach, nor to vsurpe authoritie ouer the man, but to be in silence.

13 For Adam was first formed, then Eue:

14 And Adam was not deceiued, but the woman being deceiued was in the transgression:

15 Notwithstanding she shall be saued in child-bearing, if they continue in faith and charitie, and holinesse, with sobrietie.

20 Notwithstanding, I haue a few things against thee, because thou sufferest that woman Iezebel, which calleth herselfe a Prophetesse, to teach and to seduce my seruants to commit fornication, and to eat things sacrificed vnto idoles.

21 And I gaue her space to repent of her fornication, and she repented not.

22 Behold, I will cast her into a bed, and them that commit adultery with her, into great tribulation, except they repent of their deeds.

23 And I will kill her children with death, and all the Churches shall know that I am hee which searcheth the reines and hearts: and I will giue vnto euery one of you according to your workes.

Okay? There are two very strong sets of scriptures that speak against women teaching, and there are some good reasons for that, and Paul gives a couple. Furthermore, women are not to be in authority over men in the church. Now, these verses have to be understood in the pale of Scripture, not just picking these out of context. That is, if a woman is to be in subjection, then she must be in subjection to a teacher. A man that is in fact led by the Holy Ghost. Not someone living a licentious life or a nominal Christian or a career pastor, but somebody who demonstrates all the attributes of a true teacher. That is, one led by the Holy Ghost. If that situation is true, then the woman should be quiet and in subjection and be listening in silence. Not meaning she doesn’t have comments and opinions, but she is not dictating the lesson, the message, the teaching.

That’s the difference. And Paul said, the reason the man is appointed to teach is not because men are superior or women inferior. That’s not the reason at all. The reason is that Adam was not deceived. He knew the truth and he fell by choice. Eve was deceived, her ears were tickled by the serpent. And Paul said that propensity is still extant in the female and the male. Well, sure, many men are foolishly led about by the devil and every wind of doctrine. But we’re not talking about those. We’re talking about the man who is walking in the light of the word of God that knows the Word that teaches the Word. And that is not given to licentiousness, to greed, to drunkenness, to revelry, to carrying on in worldly ways. A man that is not divorced, a man that is true to his wife.

A man that is walking purely and clearly in the faith and his life demonstrates that that is the one that you are to be in subjection to. And that is up to you as a woman to test the spirits and make sure you get this right. So Paul said don’t set yourself up as a teacher or usurp authority over men. And of course, as I said, when he says men that’s with a caveat it doesn’t mean Apostate teachers. It means those who are truly appointed by God. And you will know them because their works will show that and they will use the pure preserved word of God not being deceived by counterfeits. Now, Paul says notwithstanding, she shall be saved in childbearing if they continue in faith and charity and holiness with sobriety.

Paul is not saying that just because you give birth to a child means you have salvation. Now, what he’s saying is you have the ability to produce offspring to further the gospel, to teach these children in the way they should go. And when you do that, you’re imparting salvation to the next generation. And in doing that, you continue in charity and faith and holiness and you apply sobriety. Sobriety means not given to every wind of doctrine, not pulled every which way, not squandering your time on YouTube, having your ears tickled by junk that you already know anyway, but being diligent to the Word, being serious minded. That is the sobriety of which Paul speaks. Not being enticed into women’s conferences and foolish gatherings that are meant to make you feel good for a short period of time.

But there’s no substance. It’s just a feel good convention party and somebody makes a lot of money. You’re not to be caught up in that stuff. But if you’re married, you’re to be subject to your husband. And if your husband is not a godly man, that’s a whole different problem. But the presumption is that you have married right and your husband is a godly man. And if he is truly a godly man, he will not be spending his time watching football and other garbage on TV and engaged and involved in things of the world. His time will be spent working and diligently studying the word of God. I’m not saying people don’t need some time for enjoyment. But there are priorities. If your husband is a man whose priority is 90% television and football and foolish things like that, then that is not a man that is qualified to teach. And you have a problem because you married wrong. You did not evaluate the situation as a godly woman should. You must choose wisely.

Now, revelation, chapter two, verses 20 to 23. These are strong verses and there’s a spiritual meaning, and I’m going to read them to you.

20 Notwithstanding, I haue a few things against thee, because thou sufferest that woman Iezebel, which calleth herselfe a Prophetesse, to teach and to seduce my seruants to commit fornication, and to eat things sacrificed vnto idoles.

What does this mean? The spiritual meaning? Is that the thing sacrifice to idols and the fornication that is spiritual adultery? Jezebel the false teacher. And you see many of these kinds of women up on stages all across America making a lot of money, usurping authority over men in the body of Christ and teaching corrupt scriptures and teaching adulterous doctrines. By that they transgress the Gospel. They are teaching things that lead people away from the Gospel and the things that are not Godly. And those things are idols. Things like having your best life now, achieving a great sense of self-worth, all of these kind of pep talk things that you hear of these pulpits, not just from women, but for misled and misguided men who set themselves up as teachers in the church.

So this Jezebel of which the angel speaks, seduces people with sweet words, with words that sound good, but they’re false according to the Gospel. And that is fornication or idol worship. Verse 21 and I gave her space to repent of her fornication and she repented not. You see, God is long suffering and he understands the plight. He understood Eve’s plight when she was tricked by the serpent deceived and she fell. And so God still says to Jezebel, the false teacher, repent of your fornication, your spiritual fornication, come down off that stage and be subject to the word of God. But they will not.

There’s too much power and glory and fame in being on that big stage. So many crave it. Then the angel said, Behold, I will cast her into a bed and then that commit adultery with her into great tribulation, except they repent of their deeds, the angel is same. Those of you who follow those apostate female teachers which are called Jezebels will face tribulation. He calls you to repent of that come out from among the Jesuit teachers. Do not be a Jezebel teacher. And that means a lot of things. If you’re a woman who set yourself up as a teacher and presumes to answer questions from male viewers on YouTube and that sort of thing and offer some kind of authoritative answer, you are walking precariously close to the realm of Jezebel.

Be really careful. And those of you who follow such apostate teachers are called to repent. Repent means to turn away from that. Do not be seduced by that. Finally, verse 23,

23 And I will kill her children with death, and all the Churches shall know that I am hee which searcheth the reines and hearts: and I will giue vnto euery one of you according to your workes

Here. The angel says, the children of Jezebel, that is, the people who follow her spawns, her offspring, and those who carry her words forward will be struck down at some point in time, because God searches the reins and the heart, and he will give you according to your works. So if you’re cut from that cloth and you want to be a female teacher, usurping authority over men, ignoring the plain words of the Gospel and gathering followers unto yourself, you will be in big trouble, and so will your followers. This is what this means spiritually. It’s fornication, its idolatry. If we have faith, that means we obey the Word of God. I’m going to close this topic off now, and I know a lot of people won’t like the sound of this, but this is what the Scripture says. This is not my opinion, and I abide by this, because the Word of God states very clearly, let the woman learn in silence with all subjection. But I suffer not a woman to teach, nor to usurp authority over the man, but be in silence. For Adam was first formed, then Eve. And Adam was not deceived, but the woman being deceived was in transgression. So remember, the woman teacher is in transgression. And the angel and the angel in Revelation calls her Jezebel. She’s leading people astray not to be trusted. Bless you. Thank you for listening.