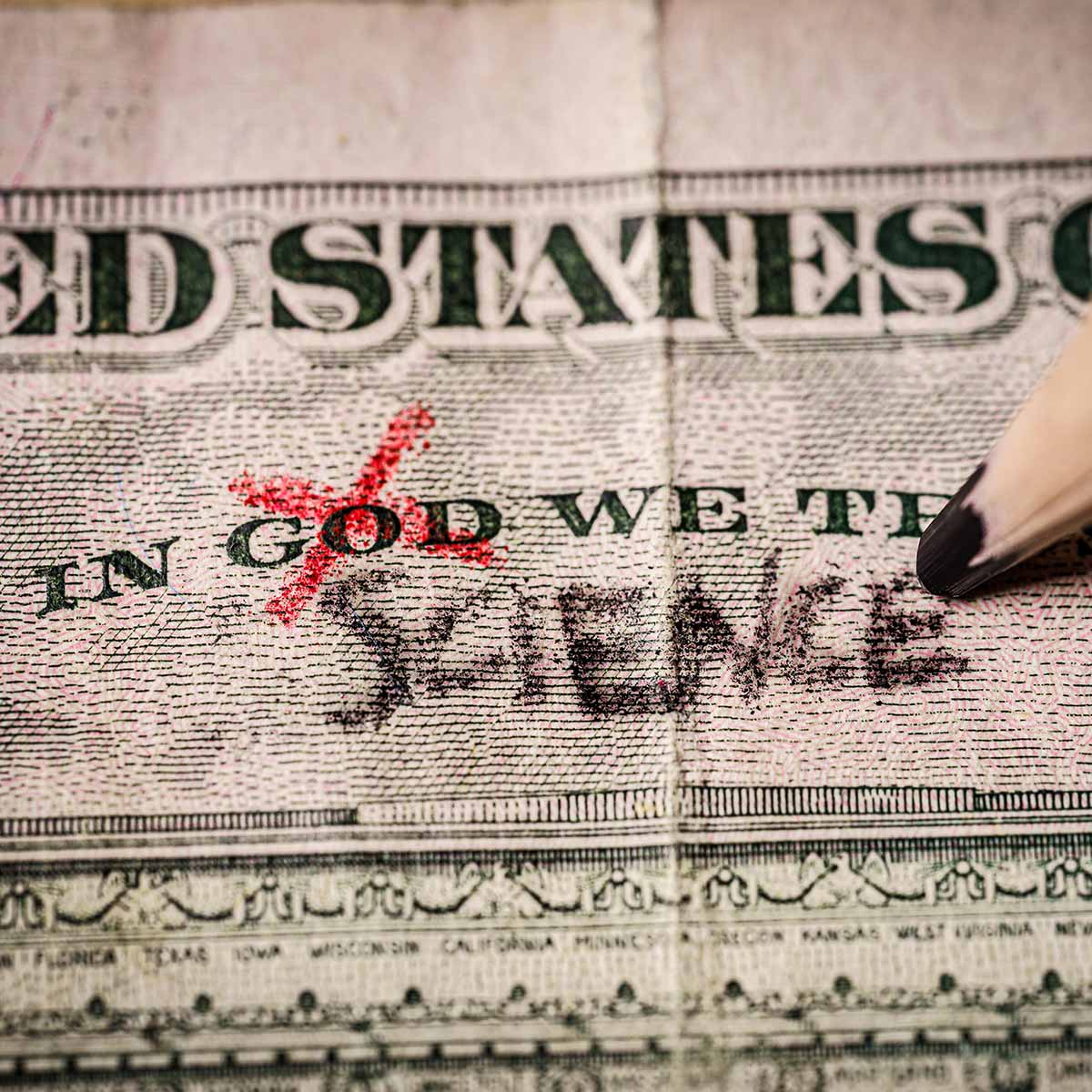 The book quoted from for all those located in the US and Canada!

Transcript: Materialism versus theism – something from nothing language as a proof every theist wants to prove God, and they all recirculate the same arguments a changed life the complexities of Creation the cosmological argument. The Bible says so. Argument and faith. How often have we heard stories of men and women who became Christians and God delivered them from drugs? It happens all the time. And how often have we heard stories of miraculous healings? The doctor said death was imminent, the disease had progressed, and there was no hope. Suddenly everything changed. A miracle occurred.

Entire organizations are dedicated to arguing mathematical probabilities from biology and chemistry and repackaging cosmology’s first mover argument. And on a so called lowbrow note, the typical Christian will say I believe in God because the Bible says God is and I take that on faith. Other than that, there are no other foundational arguments for God that I’m aware of. And on a side note, those who argue there is no God produce arguments that, in terms of construction, quality and evidence, are really no better. For the sake of this discussion, we need not get into them.

Thus, on both sides of the question, god or no God, it is the entire pale of arguments that demand one conclusion or another. Yet neither side can prove their point without a shadow of a doubt. Premises and conclusions on both sides are inductive, speculative, circumstantial, inferential and informed by opinion and interpretation. Is there anything wrong with such arguments? No, but they produce probable conclusions, not irrefutable arguments and conclusions. For this reason, it is beneficial to our understanding of our respective positions to give each other the benefit of the doubt. That is to say, the classic school of scepticism. Hume, for example, is a much more honest philosophical position to take than one of the dogmatists.

Still, one may firmly hold to their beliefs on this subject. Without contradiction, though, tempering them with reasonable scepticism. Reasonable scepticism for the theist and the atheist is not a denial of belief, but an acceptance of one’s personal fallibility, and that of those who we deem authoritative. Sometimes arguments made by one side or the other end up, if taken to their logical conclusions and examined critically, actually help prove the opponent’s position. Recently I listened to a YouTube conversation with Richard Dawkins and Lawrence Krauss, two highly regarded academics and experts in their respective fields. Krauss postulated that scientifically it is plausible for something, for example, the first particle to emerge from nothing. For most of us, theists and atheists alike, this seems untenable. It defies everything we know, experientially and evidentially. We simply have not experienced that phenomenon in our personal lives.

That worldview seems the purview of dreamers expecting something from nothing, and we conclude that nothing happens without effort. Yet Krauss and Dawkins discussed the something from nothing idea of cosmology. For an hour or so, as I pondered the plausibility of Krauss’s argument, I realized the language he used to frame or contextualize it was founded on language that argued that something necessarily preceded the first particle. One might argue that any apparent contradiction is because of the limitations of language, and we need to look past the obvious meanings of words and try to understand the concepts.

I totally agree with the argument that says language has limitations. However, I believe it is not the limitations of language that are in question, rather our ability to use language to its fullest potential notwithstanding, language is our primary vehicle of oral and written communication, and I would argue that words and language are deeply rooted in some biological and chemical functions that inform and govern what we truly know. I base this conclusion on the fact that word meanings and language evolve, and given enough time, often words take on an opposite meaning. Despite this, having read a significant amount of classic literature of every sort, I have found that great minds of all beliefs have been able to clearly express their thoughts and positions on a wide range of subjects, both factually and creatively. So I would not be quick to blame the shortcomings of language for our inability to use it skilfully and judiciously.

Rather, I would liken it to an artist with canvas, paint and paintbrush. The skilful artist expresses himself beautifully within the limitations of his materials, while the unskilled artist, given the same tools, produces inferior works. Perhaps blaming his tools in the context of the conversation between Krauss and Dawkins, I can draw two conclusions based on how Krauss expressed his ideas. Either he was unskilful with language, or he spoke freely from his heart and the words he used reflected his true beliefs. I think he would prefer the audience to assume the latter more noble and skilled position.

So if we are to side with Krauss’s argument that scientifically it is possible for nothing to produce something, we are then forced to not take his words at face value and in fact, at times redefined terms to mean they’re very opposite. For example, Krauss often uses the word creation to describe everything. Yet it is plain that when he says creation, and he often does for obvious reasons, he means not creation. The very idea of creation, and the term itself implies a creator or impetus for that which is created. In other words, linguistically, the term creation demands a creator, or, as Aristotle taught, a first mover God or something. I remind the reader that I am not at this point making an argument for the first mover.

Rather, I am arguing that language is adequate to express our ideas, and when we speak freely without contrivance, it tends to reflect what we truly believe and feel. And so, in the case of Krauss, he seems incapable of expressing his arguments that the first particle, whatever that is, emerged from nothing without resorting to language that argues for something preceding that first particle. Let me give you another example. When Krauss explains the first particle contextually, he again reverts to something language, or language that argues against his nothing produces something argument.

As he passionately explains to Dawkins and the audience, he often uses the term space. He finds it necessary to provide an environment for that first particle to emerge. That environment he calls space. Yet scientifically, and he prides himself in the scientific validity of his thesis all physicists and even grade school children know that space is not nothing. Space is something. Without this understanding, there can be no E equals MC squared. It is a formula based on the reality of three somethings that demand the somethingness of space. I’ll not go any farther down that road as the informed. Theist and atheist alike understand this principle and agree with it. Yet Krauss insists that space was the environment for this first particle, yet nothing preceded that particle. He says by that we are forced to draw the conclusion that when Krauss says space, he means not space.

How can it be otherwise? If the space he speaks of is something, then his thesis collapses. Yet he is unable to express his idea of the first particle without inferring a something preceding that first particle. Again, is my argument cosmological? No, it’s an argument from language. Why is it that when Krauss explains the first particle emerging from nothing by his language, he invariably implies something preceding it? Are there no other words he can use? Or when he speaks freely and passionately from the heart, which he does about what he believes, he can’t help but reveal his true beliefs. In other words, though stating his premise is scientific, deep down he really doesn’t believe that.

And in fact it is an ethereal philosophy with no substance in reality or the observable universe. Now, let me say that as a theist of a particular distinction, I agree with Krauss’s thesis. The first particle did emerge from nothing, and I agree that the first particle is something. Here’s why I agree with him there is nothing inconsistent with theism in Kraus’s thesis. In fact, God being described in a particular way can create something from nothing. It need not appear that God did it, though all theists believe God or a first mover did it. That is an entirely different subject and not the thrust of my argument. I insist that language is adequate to express our thoughts and feelings. And I believe that when we speak honestly, we speak from the heart. And the language that flows out of us is a reliable representation of our true beliefs. It reflects what we truly know. And I believe that when Krauss uses terms like creation and space, he means exactly what those terms are commonly understood to mean, whether he knows it or not.

And I believe that if he is inclined to change them to mean the opposite, then he does that because of an ethereal intellectual construct. He has fabricated a construct that has no basis in facts or reality, but requires that which he knows to be real be redefined as something unreal. And I believe Krauss’s language proves the opposite of his thesis. It in fact proves he believes that something preceded his first particle, whatever that something is. Call it space, not space. God or not God, the philosophical basis is the same Krauss cannot explain his first particle from nothing without implying causality or a prior condition. Thus I conclude that a good argument for God is the one Krauss makes for the first particle emerging from nothing.

While trying to make his thesis stick. He consistently references a prior condition and uses language consistent with causality and by that fundamentally supports the arguments all theists make. Any expression of a prior condition logically takes you back to Aristotle and Schaefer’s first mover principle, or that which is but is uncreated theists call that God. Lastly, if readers insist on defending Krauss’s use of language by attributing it to the inadequacy of language or Krauss’s inability to use it skilfully and accurately, then it would be foolish indeed to believe anything he says. This goes for all experts in every field.

Find far more at https://www.patreon.com/reginaldjacobblock and support this important and extremely unique work. He is an artist, radio host, prolific author and more. This website exists to promote such work and encourage us to all to see the pure testimony of God in the 1611 bible. We make zero profit or monetary gain. All work is driven by passion. You should also subscribe to his channel.

This transcript is created by Welder.com for free so may not be 100% accurate word for word so if you see errors please comment.